This book examines and compares the concepts of monogamy and polygamy. It is an easy-to-read yet thorough study of marriage and polygyny in Islam, and details the rights of both husbands and wives.

Polygamy in Islam is a favourite topic for the critics of Islam and its message. The dominant, Eurocentric global order that calls itself ‘secular’ has maligned the concept of plural marriage to the extent that its impact is felt worldwide. Some contemporary Muslim scholars have been influenced by the negative propaganda so that they felt compelled to ‘reinterpret’ the Qur’an to ‘prove’ that the Qur’an supports the European-generated concept of monogamy as the only acceptable framework for marriage. Polygamy in Islam is the outcome of thorough study by Jameelah Jones and Bilal Philips, both reverts to Islam. Their western background has facilitated a more comprehensive understanding of the topic from both the Islamic and the Euro-centered points of view. First published in the 1980s, the many subsequent editions of this book testify to its continued significance in the twenty-first century. 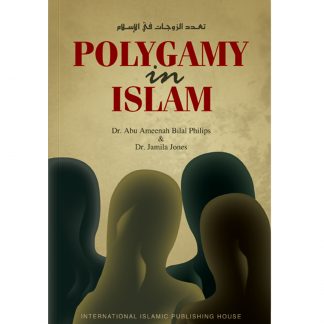 You're viewing: Polygamy in Islam $6.00
Add to cart