Tafseer Soorah al-Hujurat: A Commentary on the 49th Chapter of the Qur’an

This book on the Tafseer of Surah Al Hujurat by Dr. Abu Ameenah Bilal Philips is based on the classical works of Qur’anic tafseer (explanation of Qur’an). Surah Al Hujurat is a treasury of divine advice, commandments, and prohibitions regarding common problems in social relations, including gossip, spying, arguing, and bigotry. To help the reader make the best use of this chapter, the meanings of its verses are explained in detail.

Tafseer Surah al-Hujurat: A Commentary on the 49th Chapter of the Qur’an is a treasury of divine advice, commandments, and prohibitions regarding common problems in social relations, including gossip, spying, arguing, and bigotry. To make the best use of this chapter, the believer needs a detailed explanation of the meanings of the verses. Dr. Bilal Philips has based his tafseer (exegesis) on the methodology used in the classical works of tafseer. He has relied first of all on the explanations found within the Qur’an itself, then on explanations found in the Sunnah and related incidents which occurred at the time of the revelation of the verses in question. Beyond these primary sources, Dr. Philips has relied on the interpretations made by the Prophet’s Companions (may Allah be pleased with them) who were noted for their ability to interpret and comment on the Qur’an. ‘Abdullâh ibn ‘Abbâs, for example, was called ‘The interpreter of the Qur’an’ by Prophet Muhammad (blessings and peace of Allah be upon him). Finally, the author has made use of the grammatical explanations given in the classical tafseer works. Wherever possible, Dr. Philips has tried to apply the derived meanings of the verses to the problems of contemporary society. 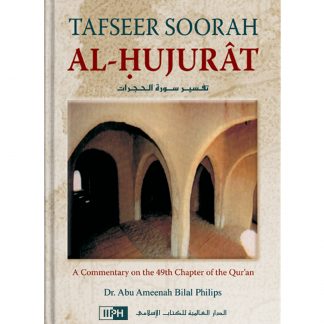